The exclusive use of the Turkish language and Turkish-style numerals (to call them Arabic numerals here would be confusing) on Ottoman stamps up to 1876 also underlines the continuity with the Ottoman past.  The Ottoman aesthetic that clothed a new western innovation was expressive of the cultural tension in the Empire.

The Ottoman Empire and Egypt had been the only non-Western states among the twenty-one which established the Universal Postal Union (UPU) in 1875.

The UPU issued rules concerning stamp design, intended to ensure maximum efficiency in handling international mail. One rule specified that stamp values be given in numerals, as denominations written out in letters were not universally comprehensible. French was the sole official language of the UPU. How the Ottomans handled this requirement is expressive of the cultural tension and political instability within the Empire.

The Empire issue was first issued in September 1876, following the Ottoman Empire's entry into the Universal Postal Union and, unlike the preceding Duloz issue, bore the name of the country and the values in Western characters as well as Arabic. They were intended for use to countries in the UPU, but in March 1888 became officially valid for domestic use. The Empire stamps were issued from 1876 to 1890. 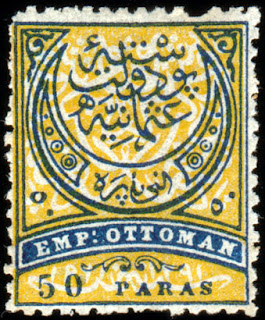 The design of the Empire issue consists of a crescent, with ends pointing upward, surrounding Arabic script, which reads, like the Duloz stamps, “Postai devleti Osmaniye” (Post of the Ottoman Empire). In the bottom centre of the crescent itself appears, also in Arabic writing, the denomination, e.g. 20 Paras or 2 Piastres. In side-panels to the lower left and right of the crescent appear only the numerical value, but in Turkish numerals. Below the crescent is a label with the works EMP: OTTOMAN, that is, Ottoman Empire, and below the label is the value in western numerals and letters, e.g. "2 Piastres".

The superficial simplicity of the stamps may have been a concession to Western tastes.

The Ottomans needed all the Western support they could get in 1876, for they faced rebellion in the Balkans, a looming war with Russia, bankruptcy and upheaval in Istanbul itself.

Ottoman reformers promulgated the short-lived constitution of 1876 partly with Western public opinion in mind. The stamps were typographed in two colours, except for the postage dues, which were printed only in black.

The superficially simple design described above was printed over an apparently mottled background pattern and the foreground and background colour combinations used are often striking.

The background, however, was an elaborate example of Islamic calligraphic art.

Like the surface design, the background consists of an inscription in Arabic characters containing the words: “Postai devleti Osmaniye” (Post of the Ottoman Empire) in five lines above a curved band, below which is the Turkish year “Sene 1291” (equivalent to 1875) the year of entry into the UPU as a founder member.

The words and numerals are written in the normal way in the right half of the design, but in the left half they are reversed as in a mirrored reflection.

This was an elaborate calligraphic practice known as müsenna or aynali. An example of such work by Abdulfettah Efendi, the calligrapher on the first Tughra issue of 1863, can be seen in the Great Mosque of Bursa. Dated 1858, this follows the mirroring practice as found on the Empire issue.

The designer of the Empire issue is not known, but the elaborate calligraphic style might suggest that Abdulfettah Efendi had some part in it, especially as we do know from Passer that the design was drawn in the Constantinople Mint. Even without this knowledge, it is clear from the elaborate design of the background that the stamp, unlike the Duloz stamps, could not have been a western production.

So we have the irresolvable cultural tension repeated in what is superficially a simplified stamp that seemingly yields traditional design practices up to UPU requirements and modernisation. The stamp design consciously smuggles in traditionalism.

Arguably, this was symptomatic of a covert resistance to the Tanzimat that was undermining the modernisation programme from within.

In fact, when the Empire stamps were first issued on the 27th September, 1876, the new Sultan, Abdülhamid II, had only been on the throne for less than one month. This followed the death (by suicide or murder) of Abdülaziz, who had been deposed by his ministers on 30th May 1876, and the incarceration of Murad V who had been deposed due to his ill mental health on 31st August 1876.

So the split personality of the Empire stamps was entirely in keeping with the two eras that the design and issue straddled, i.e. the decline of Tanzimat and the dawn of the Hamidian reign.

Abdülhamid II disbanded the parliament and suspended the constitution in 1878, and in 1892 French faded into the background on Ottoman stamps until 1913. Only Western-style numerals and Latin letters to indicate the unit of currency remained. Once more the stamps reflected the political stance of the regime in power.
© John Dunn

A subtle change occurred between the first Ottoman stamps, i.e., the tughra issue of 1863, and the Duloz issue of 1865. This difference is not between the designs, which are very obviously different, but in the inscriptions. 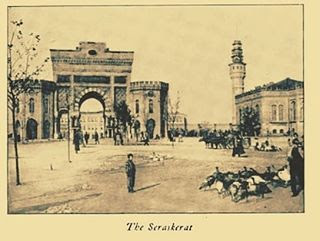 The Seraskerât Gate is a Tanzimât structure, built with an eye to the West, gothic and modernisation, whilst being consciously revivalist in its Moresque motifs.

Its modernity lies not only in its neo-Gothic solidity, but also in the fact that it adopted a graphic layout for its inscriptions that was resolutely novel. The greatest novelty was the central inscription that reads, in large thulth script by Sefik Bey (1819–80), ‘Då’ire-i UmËr-ı ‘Askeriye’, or literally ‘Office of Military Affairs’. This is a relatively early example (1282/1865–6) of the nineteenth-century practice of explicitly naming buildings by citing their nature and/or function, or the institution that they housed or represented.

In earlier times, buildings would be calligraphically marked with a poetic inscription in praise of the sultan or the founding figure of the building, including lines describing the building physically, metaphorically and functionally, providing at the very end a chronogram that would date its construction, endowment or repair. Alternatively, again in earlier times, an inscription would not refer directly to the building, but would contextually refer to its function. In most cases, the inspiration for that would be a Koranic verse or Hadīth.

What differentiated the novel way of labelling the Seraskerât Gate was its directness and its implicit reliance on the legibility of the inscription. The Seraskerât Gate boasted in huge letters the simple name of the institution it represented was boldly innovative.


Public buildings, government offices, municipal halls and post offices were all gradually subjected to the same epigraphic treatment. Why?

The practice was born at the juncture of several phenomena. A rather predictable one of these was, of course, western inspiration. A certain degree of emulation was involved in the process, due to the transformations which the Ottoman state and society were undergoing.

The modernisation of the state was certainly one of the most important developments in this respect: from a pre- or early-modern structure dominated by informal and personal relations, the Ottoman bureaucracy was rapidly growing, while at the same time becoming more specialised and more impersonal.

It was in the capital of the empire that this phenomenon left its strongest imprints on the urban landscape: ministries, offices, bureaus, barracks, schools, hospitals, factories and prisons were being built at an ever-increasing pace in order to accommodate the new services of the modernising state.
Labelling, describing, showing, separating and directing became important issues in an urban environment that was becoming more complex and more anonymous every day.

I return to the stamps.

Being coterminous with the building and labelling of the Seraskerât Gate, the Duloz issue fell under similar influences. Self-evidently a stamp for the post, the need was felt nevertheless to label the stamp as being for the post, i.e., the “Post of the Ottoman Empire”. Description was felt to be more Western and, therefore, more up-to-date than mere laudation “Sublime Ottoman Empire”.
© John Dunn.
at July 25, 2019 No comments: